Some data and statistics about multiple sclerosis:

· First described in 1868 by Jean-Martin Charcot.

· Symptoms may be mild, such as numbness in the limbs, or severe, such as paralysis or loss of vision.

· The progress, severity, and specific symptoms of MS are unpredictable and vary from one person to another.

· MS is the most common progressive and disabling neurological condition in young adults.

· Approximately 400,000 people in the United States have MS.

· There are approximately 200 new cases diagnosed each week.

· Because of the varied symptoms of MS, the average time between clinical onset and diagnosis is 4-5 years.

· MS affects women much more frequently than men:  approximately 1.7-2 to 1 in the US.

· The risk of contracting Multiple Sclerosis if a first-degree relative (father, mother, sibling) has the disease, is approx 1% – 3% overall.

· The risk of contracting Multiple Sclerosis if your mother has the disease is approx. 1 in 50.

· The risk of contracting Multiple Sclerosis if your father has the disease is approx. 1 in 100.

· The risk among the general population of contracting Multiple Sclerosis is approx. 1 in 800. 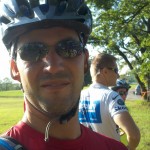 This was my first training ride.  Good weather for it, not hot at all, not very humid (for once), and a decent breeze.  Tom picked me up at 6:40AM and we drove to the River West Festival area for the ride start.  When we got there, we met up with about 10-15 other Team Superior members, and about 10 minutes later, we were off.

When you ride in a large group, there’s certain dynamics that you don’t experience riding by yourself.  One of those is the envelope of air that comes when 30-odd people are bunched together moving at 20mph.  It feels like you barely need to pedal!  Though etiquette says you should adjust your cadence to match the pace-line.  It’s also a little unnerving not being able to see much of the road ahead of you.  Most of what you see is a wall of jerseys and spandex.  On a bike path it’s not too bad, but on the road, you never know crack might be there to ruin your ride.

Another thing I’ll have to get comfortable with is putting my trust in other riders.  When you’re drafting or in a large pace line, you’re pretty close to the bike(s) in front of you, and the bikes behind you are right there on your tail.  You have to keep a steady line – not weaving left or right – so that you don’t throw off the rider behind you, and my hands were twitchy wanting to be ready in case I had to slow down for the bike ahead of me.  Of course, if you start to slow down, the bike behind you might end up being the bike on top of you. :p  So it’s an interesting balance.

Had a rest stop about 15 miles in to the ride, sponsored by the Cox Cable team, at a place called Lake Sahoma.  Very pretty down there.  The second half of the ride contained some pretty good-sized hills, and I found myself using lower gears I haven’t used in some time.  All told, the ride felt pretty good.  Can’t wait to get out there again. 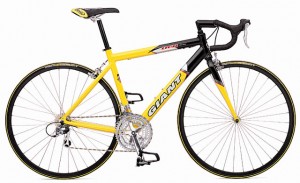 I’ve always liked riding bikes, and I liked riding road bikes because of the speed and freedom they offered.  But I didn’t really get into it until my older brother, Willie, rode in the San Francisco to Los Angeles ride way back in 2001, I think (maybe 2000).  When he visited me after that ride, he was RIPPED!  Seven consecutive days and 600 miles of riding will do that to ya, I guess.  So, I went down to LA with my bro and bought a bike.

Since it was my first – and since I was still in college and semi-broke – I didn’t want to spend too much.  I ended up buying a 2001 Giant OCR3.  With bike, helmet, upgraded seat, gloves, water cages, and portable pump, I spent maybe $550.  Talk about your entry-level. 🙂  To those unfamiliar with the bike-world, you can easily spend $4-5k on a nice high-end bike.  In fact, I know people who have spent more money on their bikes than their cars.

But, it was a start.  I rode on occasion with my brother, and did some commuting and such – 5 miles here, 10 miles there, maybe 15-20 with Willie.  But nothing consistent, and nothing very far.  California has a massive biking community, but not a lot of dedicated trails.  And the drivers out there do not for a second believe you belong on the same road as they do.  How DARE we sully their asphalt with our eco-friendly obscenities?

In any case, it was a nice hobby, but not one I partook in often.  Sometimes I’d drive down to LA and me and Will would ride from his house in Culver to Venice, then play handball at the one wall in all of California, and bike back when done.  Great weekends.  Other times he’d drive up and bring his bike, and make me suffer as he flew up the Santa Barbara foothills.   But, I had other things that kept me busy – I was an avid computer gamer back then, and if I wasn’t gaming, I was working 100 hours a week at my programming job.  Biking – as with most sporting activities – is rough if you don’t do it consistently.

Fast forward about 10 years, and I find myself in Tulsa, OK (don’t ask; long story, semi-short post), still riding the same bike I started with.  It just so happened that my neighbor was coming home from a bike ride while we were playing with the kids in the vastness that we were learning to call the backyard.  NOTE:  a LOT of homes out here don’t have fences (as ours did not) and so our backyard faced the side of our neighbor Bruce’s house.  He waved hello, and we came across to talk for a bit.  Turns out he’s a cyclist with a local crew called Team Crude, and tells me there’s a whole bunch of bike paths to ride on.  Sounds great, but this is October, and we had just moved half-way across the country, so I file it under my “Someday” category.

Fast forward another 6 months (past the freezing rains, blizzards, microbursts, mesocyclones, ice storms, gail-force winds, etc.) to May, 2010.  Bruce has a flex schedule, where he sometimes works from home, allowing him the flexibility of fitting in a ride sometimes during the day.  It just so happened that my May schedule was wide open, so on May 4th, he introduced me to the local network of trails.  We did about 18 miles at a leisurely 12mph pace.  I couldn’t believe how close these trails were, and how excellently maintained!  Almost 100 miles of dedicated biking/jogging trails, with more planned.  I guess when you have enough land to build 4 Super-Walmarts and 2 Super-Targets in a 5 mile radius, you have a little extra room to build bike paths.  I couldn’t wait to get back out there after the first ride.

The next week and a half rained every day.  Ridiculous.  But, that’s Tulsa weather for you.  My next ride was on 5/15, just thought I’d ride out on a Saturday.  Right when I left I ran into a man named Tom, a neighbor in the development just south of ours.  He rides with a group called Team Superior, and told me about their Monday afternoon group rides.  So I said I’d meet him on Monday.  Did 25 miles on that Saturday, but I didn’t really feel it until I met up with Tom and neighbor of his named Mike.  These two have been riding a long time – to the point their calves look like braided steel cords.   But they were nice and didn’t leave me too far behind.  Met up with the rest of Team Superior, and did another 22 miles.  Man oh man was I feeling it after that ride.  The sedentary life of a programmer was seriously disagreeing with what I was telling my body to do.

After that, I continued riding with Bruce on the occasional Tuesdays/Thursdays and with Tom and Team Superior on their Monday rides.  Distances started to add up, and my pace got faster (Team Superior keeps a wicked-fast pace).  But then, summer hit in earnest.  Heat indices were pushing 100° daily, temps rarely dropping below high-80’s/low-90’s, and humidity that left concrete feeling soggy.  But, I slogged through it.  Got myself a 70oz Camelbak, two new water bottles, and kept pushing through.

It’s now been over three and a half months since I started riding again, and I’ve done 792 miles.  I’ve ridden a total of 53 hours, and my overall average speed is up to 15mph.  I recently hit a new high average speed at 17mph over 25 miles (and note:  I was STILL only in the middle-group with Team Superior).  And after lots of convincing from both Bruce and Tom, I decided it’s time to put all these miles to good use.

I read up on the 2010 Bike MS Ride that they were convincing me to do, and started to read more and more about Multiple Sclerosis.  The more I read, the more I felt this wasn’t just something I wanted to do, it’s something I have to do.  So, I signed up, and with the generous support of my family, friends, and clients, I’m almost 2/3rds of the way to my fundraising goal.

Tomorrow morning, I’m riding my first official MS Training Ride with Tom, which is slated for about 35 miles.

See ya on the other side.