You ride again, you don’t crash, you’re happy, but… you start to wonder. Is my number almost up?

The more miles you ride or race without a crash, the more you might think, “It’s gonna be my turn soon.” The longer you ride, the more inclined you might be to think this way.

This is what’s known as the gambler’s fallacy. The idea is that given a repeated outcome, you start to mistakenly believe that this outcome is less likely to happen again. Like riding without a major incident: it’s easy to start thinking that the longer you ride without crashing, the more likely it is that a crash will happen.

The more times it lands heads, the more someone will start to think, “It’s going to land tails, because it hasn’t yet, and therefore it should.” The reason for this is your perception of the odds have been skewed by the results that came before.

The chance of five flips in a row being heads is 1:32 (one in 32). But see, here’s the mistake: you already know the results of flips 1-4: they all turned out heads. The chance of those flips ever being tails is actually zero. So what are the chances that fifth flip will be heads again? 1:2 (a 50/50 chance). The odds haven’t changed at all, just your perspective.

The gambler would think, “I’ve played this slot machine 99 times and haven’t won. But I have to win at some point because the machine allows winning, so the more I play, the more likely it is I’ll win.” But each time the gambler pulls that lever, their odds of hitting the jackpot that time have reset to exactly the odds they had on their first pull (which in Vegas, means virtually never).

Now that we understand how we fool ourselves into believing that the chance of something happening is affected by the number of times it does or does not happen, we can apply this to crashing.

What are your chances of crashing on your first ride in comparison to your one hundredth, or your one thousandth? If you do the same ride each time, then it’s essentially the same. What are the chances of you crashing in your first race, or your second, or your tenth? Ditto.

I say “essentially” because as you ride, you pick up valuable skills that make you less likely to encounter one of those bad mishaps. You learn to handle your bike better. You learn how to corner, how to brake fluidly, how to ride in a group. These things should reduce the chances of your impending doom.

However, you also start to go farther, ride faster, take sharper turns, or ride in tighter formations. So though you’ve picked up better skills, you’re also taking bigger risks. Your chances of crashing – assuming the risks you take are in line with the skills you’ve learned – are unchanged.

It’s that last assumption – that our risks are in-line with our skills – where we get into trouble. As cyclists, we exemplify the phrase “If a little is good, a lot must be better.” If we can go far, we want to go farther. If we can go fast, we want to go faster. And our confidence and need to do more will inevitably blow past our actual skill level.  In other words, our risks will ultimately outpace our abilities. Worse, we typically don’t notice. This is known as the Dunning-Kruger effect.

Dunning-Kruger effect: a cognitive bias in which relatively unskilled persons suffer illusory superiority, mistakenly assessing their ability to be much higher than it really is. 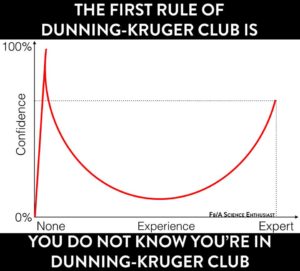 If that definition doesn’t SCREAM cyclist, I don’t know what does. Point is, as we start to take bigger risks and outpace our abilities, we change the chances of something bad happening.

Now, the gambler’s fallacy can be useful in this situation, since it can act as a brake, making us think, “Hey, nothing bad has happened yet, so maybe I should be more careful, because it’s bound to happen at some point.” But then the Dunning-Kruger effect kicks in, and we think, “But I haven’t crashed yet, so I must have some mad skillz. That’ll make it less likely for me to crash.”

Depending on your personality, you might stick with the first worrying thought about crash potential. But it’s more likely that you – like virtually all cyclists before you, including me – will envision themselves the as some kind of undiscovered species of super-cyclist, ready to take the world by storm.

And then you crash.

So, what can be do about these two competing paths between the Gamler’s Fallacy and the Dunning-Kruger effect? Basically, we have to walk the tight-rope. First, don’t let the possibility of a crash stop you from trying to be a better cyclist. The only way to build skills is to keep riding, and though you want to be cautious, don’t let that fear of a crash stop you from progressing.

On the other end, DON’T BE STUPID. Temet Nosce – know theyself. Know your limits and take a step back before you blow past them and get into serious trouble. If you understand the cognitive effects at play on both sides, if you’re open to an objective view of your abilities, then you’ll not only help to keep yourself out of trouble, but you’ll developer your skills faster as well.