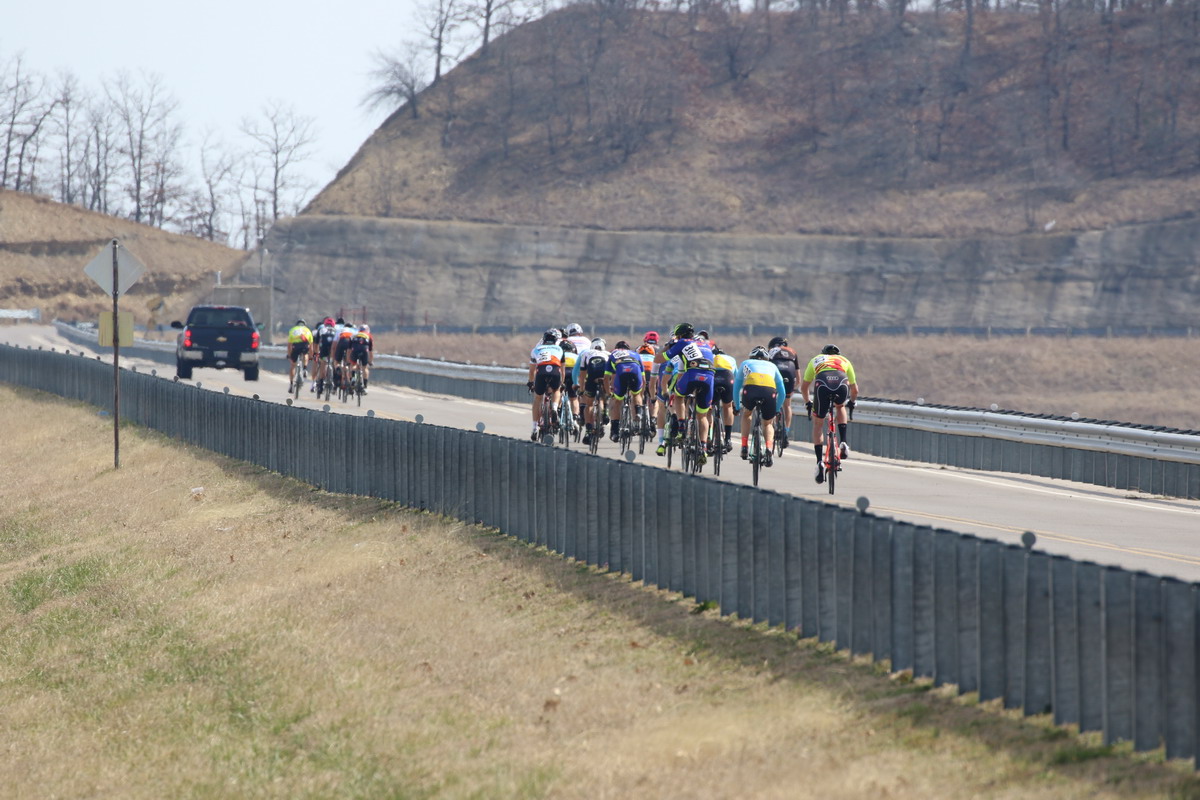 Some days you’re the rabbit. Other days… well, you’re still the rabbit, but you happen to be skewered and roasted.

At the race this past weekend, that was me. Welcome to the 2016 Tall Chief Road Race.

Last week I talked about how a bunch of little things could’ve gone wrong and totally changed the outcome of the race. This week almost everything went right, until one of those “wrong” things managed to sneak in there and gave me a rude wake-up call. But, I’m getting ahead of myself.

Tall Chief is one of the early-season races in the greater Tulsa area, put on by the Tulsa Wheelmen. It’s located on a beautiful set of climbs next to Skiatook Lake, west of Tulsa. Last year’s longer, 20.1 mile loop was shortened to 14.7 miles, with the number of laps increased across the board. This had the effect of ramping up the climbing while shortening the distance between climbs. The hills for this race are packed together into the first four miles, and the finish is up a 6% grade (should you make it that far).

I thought the wind was tough down in Little Rock, but Ma’ Nature isn’t one for resting on laurels. The wind started in the teens and twenties, but increased throughout the day, with gusts way up into the mid-30s from the South. Combine it with three miles of climbing into that headwind? Time to add a guest room to the pain cave. Not enough you say? Let’s crank the thermostat to an unusual-for-Spring 80°, and you have the perfect recipe for a battle of attrition.

If you like to see people rolling into a finish line in small groups and/or one at a time, ready to fall off their bikes? This is the race for you.

Roll out for the Cat 4/5 35+ field – 68 strong – was pretty smooth, and the first set of climbs wasn’t bad – it never is, right? My teammate Vince went off the front for a while, with Paul, Brett, Mike, James, and myself hanging around in the top third of the field. Apart from realizing the wind would be a huge factor as we traveled East off the dam or West along the virtual-cobbles of Oak Rd., the first lap played out without any issues.

The second lap started out much the same way, though this time the pace was pushed up the first climb, no doubt shelling some of those who barely managed to hang on through Oak Rd and the mile-long South stretch to the starting line. By the time we we finished with the second set of climbs, the field was easily half its original size, with the wind still picking up strength, and my heart rate refusing to stay where I wanted it.

It was when we turned North on the second lap where things started to pick up. Several Team Tom’s guys partnered with some Air Assurance and started to push the pace, holding at 30 mph for three miles. When we hit the stupidly-rough Oak Rd. and crosswinds the front didn’t let up, taking it about 2 mph faster than on the first lap. At this point I knew I was pushing too hard to hold with them, but not wanting to lose my team a position in the lead group, I thought, “Burn a little more through the climbs, and you can rest.” Yeah… that was wrong.

I knew I was in trouble when we made the turn to start the last lap, on the first hill, right at the bottom. That twinge we all know and loath that prognosticates a dark future. I felt it in my left hamstring at the base of the first climb, so I stood up to work the quads more, avoiding up-stroke pulls, hoping it would work itself out.

By the time we got up the first climb to the dam, there were 12-13 of us left in the break. I was at the back, with no shelter from what was now easily a 25-30 mph crosswind. We turned South to start the last set of climbs and about half-way up the hill my left leg locked. It didn’t just cramp; it wouldn’t move. Despite drinking water, taking electrolytes, eating food, my leg just said no more.

I coasted to the side of the ride and unclipped my right leg, but couldn’t get my left to unclip. I had to lift and turn the bike in order to unclip the leg, all the while gritting my teeth (and yelling). I watched the front pack continue to roll off as the pain increased. Watching them pull away just made the cramp intensify – I was there, I was with the lead group, with two more miles of hills and I’d have a chance to recover, and there wasn’t a damned thing I could do about it but stand on the road yelling, trying to get my leg to unlock.

The chase group – containing my teammate Paul – came up and passed me. I tried to start pedaling but couldn’t get my left leg to clip in. Three times I tried and it slipped off the pedal because I couldn’t put enough pressure on it. I finally one-legged it until I could get enough speed to reduce the pressure of clipping in.

By then, the lead group was maybe a half-mile ahead, and the chase group with Paul was a quarter-mile or so. I put my head down and started to ramp my pace, all the while trying to use any muscle group but the one that was yelling at me. But into a headwind like that one, it was no good. I made some ground on them, but not enough to catch them.

When I came off the climbs and headed East I was in full TT mode. Without a group, there was no break, no rest, no protection. Just before turning north, I saw a racer come to a stop in the middle of the road from the chase group ahead of me. I knew that doubled-over look of pain, even if I wasn’t able to tell who it was. The racer worked their way over to the edge of the road and as I closed, I realized it was my teammate Paul. What happened to me on the climb happened to him only a couple miles later in the crosswind.

I turned North, and by then a smaller, second chase group had caught up to me, along with my teammate Brett. We both piled on the speed and left the group behind. Brett offered to pull for the rest of the North stretch, at one point bringing us to 35 mph, but I couldn’t hold. He slowed and looked back for me, but I waved him on, hoping that he’d catch and maybe pass the chase group, with as strong as he was riding.

By the turn West, the lead group had perhaps two-thirds of a mile on me, the chase a third of a mile, and Brett hot on their heals. Behind me were the remnants of Brett’s second chase group. They came up beside me offering a little shelter, but perhaps decided they wanted me to suffer and dropped back behind me again.

When we turned South for the last time, I think that group wanted me to stay out in front. Wasn’t happening. I didn’t care if I had to stop; I wasn’t pulling anyone into that wind. I slowed to 12 mph on the outside of the road, and just waited. A few of them took the hint and picked up the pace, and I jumped in about three wheels back. When we hit the last climb I got out of the saddle and pushed as hard as my cramp-ridden legs would go, with my left hamstring, calf, and right quad all trying to lock up.

I crossed the line, barely pedaling. By now I wasn’t thinking about the pain, or the heat, or the wind. I was only thinking about that lead group; about what I could’ve done to work through that cramp, to hold that group a little longer. Already, standing there at the finish line not a few seconds after crossing, I was trying to figure out how I went from feeling solid and having a shot at a top-10 place or more, to looking like an utter train wreck, and maybe finishing in the top-half of the field.

It turned out Brett was able to catch the chase group and pass them, but wasn’t able to hold all of them off on the climb. It was still a crazy-impressive output to chase them down solo like that after two hours. He got 16th. I came in 20th. My goal for this race was top 15, and my hope was for top 10. Given I had to stop for two minutes and one-leg half a climb, I’m not… disappointed, per se; just not thrilled either.

Everything was going well… until it wasn’t. And that – in short – is racing.

The lead group was strong; they chewed me up for half a lap and I ended up spit out the back. No excuses, no missed opportunities or crashes or gear malfunctions. It was a hard day, a hard race, and I didn’t have it. All credit to those that did and toughed it out to fight for the top-spot and some well-deserved glory coming across that steep line.

Other race notes: My teammate Chris took 1st place with a blistering effort in the Cat 4/5 U35 race, leading 2nd place by nearly 10 seconds. Ariel took 7th in a really strong field of 1/2/3 racers. And for many of our team this was their first road race, and I congratulate them and solute their courage for stepping up to such a hard race. To quote LeMond: it doesn’t get easier, you just go faster.