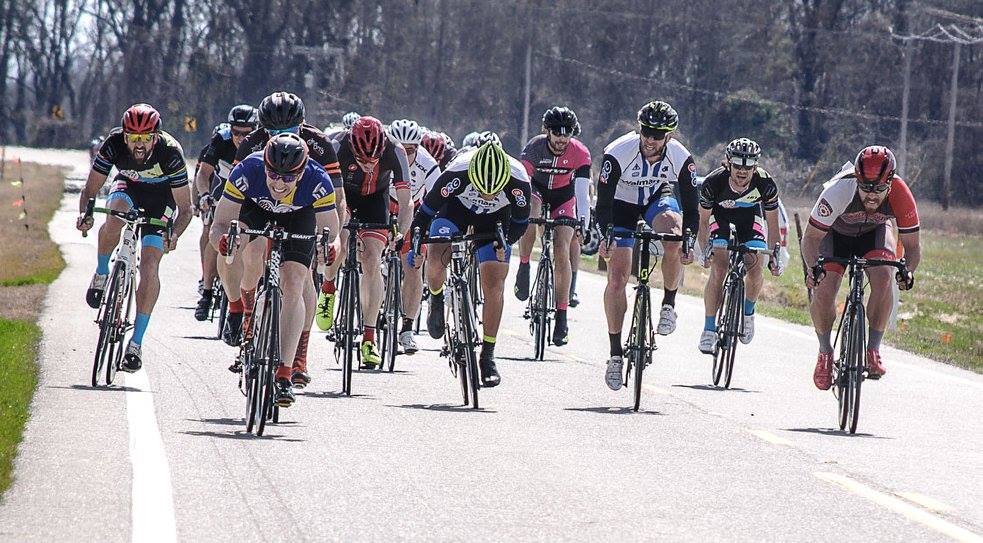 When it’s windy out, I try to train anyway. And in Tulsa, we know all sorts of wind: breezy, gusty, OMFGsy, etc. If you don’t train in the wind out in the Midwest, you might as well not ride your bike.

My teammate James and I headed down to the race course the day before to warm up the legs and get the lay of the land. If you don’t like climbing, this is the course for you. A four-corner loop of about 12.7 miles with less elevation than Ben Carson’s poll numbers. But to use young-people vernacular, “Dat Wind, tho!”

The course starts off East, making a clockwise loop. On race day, the temperature warmed up nicely, but the wind came with it. By the time the Cat 4/5 field was set to roll at 10:45, the wind was already kicking up to the high teens with gusts in the twenties.

The 4/5 field was large, with 54 racers, and only three of us – Vince, Stephen, and myself – from Bixby Bicycle Works. That puts you on the defensive, knowing that you have limited resources: easy to get separated from your teammates in a field that large, harder to protect each other, and neigh impossible to control the field. So the plan was simple: stay hidden and watch for opportunities.

Within 10 seconds of turning onto the main course the field surged from 16 to 26 mph. Vince was sitting perhaps 15th, I was back around mid-field, and Stephen was a few spots behind me as the peloton picked up speed and stretched itself out. The yo-yo effect was strong and racers were squirrely as we entered the first turn and pointed ourselves into the wind.

Though the speed dropped from the initial leg, this is where the race really began. It felt like the field as a whole didn’t know quite what to do with the wind: does a group try for a break? Does the field push the pace and try to shell riders? The yo-yoing only got worse until a rider a few spots up slammed their brakes and several of us went into skids. We stayed upright (at least, everyone I saw around me at the time), as we left the shelter of the trees and into farmland where the speed dropped to 17 mph as the front of the peloton was battered by that southern wind.

As expected, once we turned West, the field surged again and the crosswind was absolutely brutal. The squirreliness combined with the crosswind and acceleration could only lead to disaster, and that’s what we got. 0.2 miles after the turn a rider went down a few spots up, followed by another, and another. I locked up my brakes and skid to a halt into a rider who was standing next to one that went down. As quickly as I could, I went around the downed rider, clipped in and started sprinting to catch the pack.

[Sidenote: turns out I did hit either the downed rider or the one standing next time him – I discovered a couple days later my front wheel was out of true and I had three very bent spokes. Very happy they didn’t break during the final leg of the race, otherwise I’d have been a 200m smear on the road. Lesson: check your bike before and after every race!]

Here it was, not even half-way through the first lap, and I thought my race is about to be over. A couple of others were ahead of me trying to catch the large break of 20 or so that managed to not be caught up in the crash. We were in no-man’s land – no one was around me and the crosswind was starting to wear me down as I chased.

What we didn’t know as we hammered to catch the break is that the race moto was just about to neutralize the peloton so the P123 race could pass us. When everyone slowed to 15 mph, all I could think was, “Well, there’s one less match I’ll have later.” As much as it sucked, I can’t imagine how tired I’d have been trying to hold the peloton after sprinting back on. That neutralization probably saved my race.

We were neutralized for about four minutes as the moto waited for the P123 break to get around the carnage we had left behind and then pass us. Plenty of time to recover from the chase, but also plenty of time for a lot of the field caught up in the crash to catch us as well. By the time we were released and back up to speed, the majority of the field was back together.

The next few sections of the race were mostly uneventful, though as we discussed pre-race, positioning was going to be key. On headwind sections, I had to be back far enough to be protected from the wind, but not far enough to be affected by the yo-yo movement of the field. On the crosswind sections, I had to work from one side of the field to the other so as to keep away from as much wind as possible. It was definitely a test of patience and timing.

On the last lap, it was time to start moving up. The field was stretching now, as Team Tom’s Bicycles had taken control of the field and started to drive the pace. When we turned West for the last crosswind section, I was sitting near the front, protected from the wind by riders on my left. There was one rider up the road killing himself in the wind – all that was left of a failed break. A rider (I believe from CARVE) took off, followed by three other racers. Being at the front and rested from being protected from the crosswind, I jumped on, thinking that if this break held until the turn north, it’d be hard to chase down with the tailwind.

This is the second time my race could have been over. After about twenty seconds, the racers in the break decided it wasn’t worth it, I guess, and started to ease up. I almost went for it anyway, but remembered the plan: stay hidden, conserve energy. If I ended up pulling this group, I’d only be worn down for the turn North, or worse I’d end up out on my own. So I eased back to the peloton along with the others.

When we did finally turn North, Team Tom’s – lead by the inimitable Tom Moritz – ramped the pace from a relatively sedate 22 to a blistering 32 mph. It was incredible work. For miles they just kept pouring it on.

By the time we hit the 1k mark and came around the final bend, I was sitting 5th or 6th. A young rider got eager and jumped early. Seeing a couple of others starting to stand up and push even harder, I had a now-or-never feeling, and I jumped on his wheel and slipped through a small gap on the edge of the road. A few seconds on, the young rider tired and I swung past him, using him as a lead-out. Once I was out on my own I knew we had gone too early, but there was no choice but to put my head down and hold it as long as I could.

The field was coming on hard, and I knew several of them were powerhouse sprinters that could fly past at any moment. Didn’t matter – I could only do what I could do. I had hit 39 mph, but was starting to slow – 47 seconds is more like a TT than a sprint. I crossed the line first, and only then did I see a rider appear by my side – Blake Kingfisher had come up in full-on sprint mode. Had there been 100 more feet, he’d have had me.

I wasn’t the strongest out there, nor did I have the fastest sprint. But, I had position, I had timing, and most of all I had some luck. Because in a field with so much talent – and yes, even a 4/5 field can be packed with awesome racers – sometimes it comes down to a bunch of little things you can’t control adding up with those things you can. I worked hard and stayed efficient and protected. But, I also didn’t go down in the crashes and got clear. My spokes didn’t break. I got rest when the field was neutralized. And I got a lead-out from a rider who jumped early. Any one of those things could’ve gone another way.

So yeah, no doubt I’m happy with the results – it was a good, hard-fought race and a great way to start the year. But I also give serious props to all the racers at that finish line, for any one of which it could’ve easily been their day to hit the line first. I look forward to coming back next year, I thank CARVE (Central Arkansas Velo) for a great race, and look forward to future contests with those great athletes that made me work to my fullest.