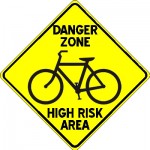 After surveying over 300,000 drivers in ten of the cities rated as being the least cycling-friendly cities in the country, researchers spent eight months analyzing the collected data. They concluded the reason for the intense dislike of cyclists by motorists came down to a single emotion: jealousy.

“The results were pretty striking,” says Dr. Carson Shingh, lead researcher for this research project sponsored by the U.S. Department of Transportation, USA Cycling (USAC), DARPA, and CLIF Bar. “The surveys were designed to actually avoid direct references to cyclists, but instead referenced characteristics of people who enjoyed the benefits that typically come from cycling.”

As motor vehicles became more powerful over the decades, the desire to minimize travel time between two locations became the “driving force” behind using a motorized vehicle. “Leisurely weekend drives have nearly disappeared in the use of motor vehicles,” says Dr. Shingh. “As people tried to get from point A to point B faster, they found themselves stopped by things like speed limits, gas mileage, increasing fuel prices, and a massive increase in number of other automobiles trying to do the same thing.”

The study shows that as gas prices increased, drivers became more aware of the amount of time – and therefore the amount of gas – they were using to travel places. “The automotive industry continued to build newer, faster, and more powerful vehicles, and all that power and speed turned out to be useless,” says Prof. Gina Canto, another researcher involved in this project. “As speed limits increased, cars tried to go faster, but found there were even more cars to contend with. Urban sprawl, stop signs, and other similar developments made the average speed they traveled far slower than drivers thought they would achieve with their super-vehicles.”

This perception of time consumption is flouted by cycling. Dr. Shingh says “Cyclists that commute are taking that time factor that is paramount to motorists and throwing it out the window. Instead of getting to work in 15 minutes and increasing their stress exponentially for each minute their average drive time is increased, it takes them 45 minutes. Maybe even an hour. They arrive at work with less stress, more awake, having saved money by not buying gas, and end up healthier in the long run. Or ride, as it were.”

When analyzing emotions directed towards the non-commuting cyclists, these feelings are much stronger. “Motorists can’t stand seeing a cyclist riding around in spandex, just killing time. They view the cyclist as lazy, simply riding around, with no real purpose. They can’t fathom why anyone would spend hours and hours to travel in a large circle, end up back where they started, and basically waste all that time that they as motorists are trying to save.”

While researchers thought this disregard for time would lead to anger – and there is plenty of that – it turns out that jealously is the instigator of that anger and other related emotions. “Despair at their own vehicular entrapment. Anger at the disregard for time. It was jealously that was found at the root. If a rich person buys a new car because their old one got a scratch, most of us would be upset that they just wasted a lot of money. But the reason we’re upset about that waste of money is because we would like to have that money ourselves. In this way, motorists would like to remove their need to save time so that they can eliminate the costs of trying to save it: the additional stress, the fuel costs, the health costs, and so on.”

Dr. Shingh recommends that cyclists should try to look as stressed, unhealthy, and unhappy as possible. “This will help motorists be more empathetic to your feigned situation. They will think that you’re just operating a slower, less powerful vehicle, and that they are better off in their vehicle than you are using yours. Try to wear run-down, baggy clothes. And if you insist on wearing spandex/lycra based cycling clothing, make sure it looks faded, old, perhaps stitched-up. Instead of being jealous, they’ll feel pity for you as a non-motorized traveler. And it’s difficult to be jealous or feel anger towards someone you pity.”