As the old saying goes, everything’s bigger in Texas. Long, straight roads that appear to go on forever. Temperatures that ovens envy. Endless skies, and miles and miles of nothing. And once a year, nearly 15,000 riders gather in north-east Texas for one of the largest organized rides in the U.S. This was the 30th anniversary of the Hotter ‘n Hell 100.

Team Superior had a strong showing at this event, with 21 riders taking the field on the 100k or 100 mile routes. The ride takes place down in Wichita Falls, TX – about 4 hours south south-west of Tulsa. Most riders drove down Friday for the large expo that takes place at the HHH, and then joined up with the rest of the riders who didn’t go to the expo for dinner at Luigi’s over in Lawton. Lawton’s only about an hour away from Wichita Falls, and has a lot more hotels. Of course, this meant that we all had to be up at about 3AM in order to gather and roll out by 4AM, just to get there and start preparing at 5AM. So the first obvious challenge we were facing was sleep deprivation.

Next, food. Though most had small snacks, it’s hard to get a proper meal in before a ride that rolls out at 6:15AM. Myself, I went with a PR*Bar and some water. Others snacked on Clif bars, PowerBars, Gatorade, the usual mix of stave-off-starvation snacks. Next year, I’m packing a couple of coolers with drinks and post-ride food, and I’ll try to figure out how to cram in a meal before the ride.

Being from New York, I’ve seen thousands of people before gathered into very small areas often. But I’ve never seen them dressed in bike garb, half-asleep or wired on caffeine. You got this sense that any minute now something would spook the cyclists and in a rush to vacate the area all those gears would turn into a large meat grinder. Fortunately, that wasn’t the case. The start of the ride was rather sedate. The team was rolling at the 6:15 start time – versus the regular 7:05 start time – so we didn’t get the cannon send off and the air force jets flyover. The only indication that something was about the happen was that the helmets of the thousands in front of us started to shift side to side like a wave, and hundreds upon hundreds of tiny clicks like marbles rolling down stairs (people clipping in). A minute later, we were slowly inching, then walking, then coasting, then cycling forward.

All things considered, it was a beautiful time to ride.  Dark, but the temp was nice and cool – barely 80° – and the wind was calm, so it was a refreshing roll-out. It took about 5 miles for the mass to start moving at a proper pace. At that point, Bret started finding holes and I pursued, followed by Neal, Lance, Doug, Steve, and Laura. We kept a choppy speed-up / slow-down pace for almost the first 20 miles, where we ran into our fist large crash. When thousands of cyclists are bunched together heading down their first significant hill, and the down-hill switches to an up-hill, they’re just not ready for it. And bam, you get your first crash and pile-up.

Once clear of this area, we really started to get moving. Doug, Bret, Lance and I ramped up the speed to some 25+ mph, and hop-scotched from pace line to pace line, passing literally thousands of riders. By 8AM, we were already some 38 miles in (a pace of about 21.8 mph). There was talk initially of stopping at the rest stop at mile 40, but maybe we were felling too good, because we blew right past it. Side note: to demonstrate how much of a beast Lance is, he stopped at mile 40 to get water while the rest of us kept flying, and he STILL managed to catch us even at that stupidly fast pace we were holding before we hit the next rest stop. That’s just incredible.

At mile 53, we hit our first rest stop. Nascar fans woulda been proud – took us less than 4 minutes to fuel up, hit the head, and roll out (okay, maybe not Nascar speeds, but relatively speaking…). Our pace at this point pulled back just slightly to around the 22-23 mph range, and the heat was steadily building. The next 25 miles rolled by pretty quickly, including Pyro Pete and Hell’s Gate. I believe the team would’ve kept rolling, but I needed a serious break as my pace was falling off quickly. So we pulled off at the rest stop at about mile 78, and rested here for about 8 minutes.

The next roll-out, I stopped taking pulls at the front, hoping that I could at least maintain the pace. We had agreed that the four of us were going for a sub-5 hour finish. Unfortunately, even without taking pulls at the front, it just wasn’t meant to be. I was spent, and by mile 85, I fell off the pace line and watched Doug, Bret, Lance, and several other riders we picked up roll into the distance. The next five miles I managed to keep an 18.9 mph pace – pretty respectable for being on my own. But when I rolled into the large rest stop at mile 90, that was it for me. We had done 90 miles on about 12 minutes of rest. I sat down on a chair and was just barely managing to remain conscious. Air temp was around 102° by then, and road temp was pushing 115°. I decided earlier this summer that my one of my biggest weaknesses is heat. And with record-breaking temps in Tulsa all summer, I’ve had plenty of time to learn just how horrible my body responds to extreme temps.

Several docs and volunteers were checking me out, putting cold towels on me, and eventually moved me to a cot to lay down for a while. They helped stretch my quads, calves, and feet which were not quite cramping but definitely feeling way too tight. In all, I laid there nearly 40 minutes. But I wasn’t gonna quit – not with 12 miles to go. I eventually got up, put my gear back on, and started rolling again. The next 5 miles was at a 16.7 mph pace, trying to get my legs back under me. The road was heating up quick. I got to the mile 95 rest stop, and sat down for another 5 minutes. I wanted to make sure I had enough in me to blast the last 7 miles. And that’s exactly what I did. Got up, and averaged some 18.5 mph for the last leg. From the time I was dropped at mile 85, I was pretty much on my own. Some cyclists were moving too slow to draft, others too fast. So the last 17 miles were pretty grueling, but I made it.

In all, my total time ended up at 5:55:10. My moving time was just shy of 5 hours, at 4:55:05. I think my total time was pretty respectable, and I just couldn’t believe the moving time that I set down thanks to our power-riders. This was after all the first hundred-mile ride I managed to complete this year (after failing at Tulsa Tough at 91 miles, and our team trail centuries at 90 and 76). After cooling off for a bit in the fire hydrant, I laid down below a tree and I’m quite sure I passed out for the better part of an hour.

Next year, it’s all about the sub-5… and not passing out. 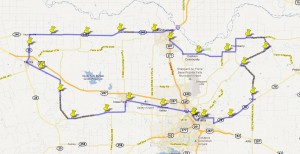