Siddhattha Gotama – also known as the Buddha – described the middle path as the moderation between extremes.  Aristotle referred to this as the “golden mean”, the desirable middle between excess and deficiency.  For example, too much courage can lead to recklessness, too little to cowardice.  Finding balance in all things – be it work, play, food, sport, love, etc. – can lead to a very happy and healthy life (of course, I’m ignoring the über-rich folks for whom “balance” refers to splitting their travel time between limos, private jets and their Aston Martins).

When riding, there are many aspects where the middle path will serve you well. The more I focus on centering my state of mind as well as my body, the easier and more enjoyable I’ve found these long endurance rides to be.  Below are a some of the areas where applying the concept of the middle path has worked well.

Goals:  it’s very easy to focus on the finish line or the next 40 miles when you’ve only done 10.  The finish line can be a long way off – don’t believe me?  I once drove the kids to a park that I found while biking.  I knew the distance in terms of miles I had traveled (which seemed like no big deal), but didn’t really understand how far that was until it took us nearly 20 minutes to drive there.  🙂  Trying to visualize a goal that won’t be achieved for a long time is frustrating at best.  Focusing on all the work you’ve yet to do or how tired you are from the work you’ve already done will just help to wear you down faster.

Instead, try to keep your mind focused on continuous, attainable goals: good riding form, smooth pedal strokes, good cadence, staying hydrated (BIG ONE!), and keeping your line of travel.  Before you know it, you’ll be at the finish line, or at least your next rest stop. 😉

Pedal Stroke:  when pedaling, you want to control the movement of your upper body and hips.  Your head, shoulders, and hips should remain as centered and still as possible.  Often when I find my energy flagging – especially while climbing a shallow but long hill – I notice that my body will start to rock side to side.  The instant I still my body, I don’t feel nearly as tired and I start generating far more power per stroke.

Keeping your Line:  on long rides – especially with larger groups – travelling in a smooth, straight line not only saves time, it saves quite a bit of energy.  The more you weave side to side, the longer your actual travel path is.  Might not seem like much, but it adds up.  Moreover, you become unpredictable, making other riders nervous, which can disrupt a pace line and reduce the effectiveness of drafting.  Keep your upper-body relaxed, while maintaining firm control of the bike.  Focus on a point perhaps 25-30 feet ahead, and the shortest route to get there.

Hill Climbing:  this is a tough one, because the longer the hill is, the harder it is to think of anything other than “When the hell will it end???”  There are many ways to fall away from the middle path on hills:  too high a gear and you’re using far too much force per stroke; too low and you’ll lose momentum, speed and rhythm.  Work too hard on the hill, and you won’t be able to keep up with the pack once you’re beyond it.  Work too little, and the pack will pass you by, and you’ll have to work harder to catch them on the other side.   If climbing a hill in a standing position, your bike needs to rock side to side to counteract the additional pedal force.  Too little rocking and you won’t get much from the extra force applicable in a standing position.  Too much rocking and you’ll be expending additional energy and most likely lose your line, increasing the overall hill distance. 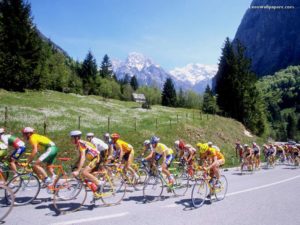 So when climbing a hill, I try not to focus on achieving the top of the hill, but instead on maintaining a steady rhythm and still having energy when I reach to the top (because there’s nothing worse than reaching the top only to find another hill right behind the one you just climbed).  I shift early and increase my cadence to counterbalance the decreased applied force.  And like with keeping my line of travel, I focus on the area slightly ahead, and not the top.

Group Mentality:  riding in a group is a lot of fun, especially when they’re experienced riders.  But remember – not everyone in that group is equal.  Some riders have far more power, some less.  Some can maintain cadence speeds that can’t be found in tap dancers.  It’s OK to try and push yourself to keep up with a group, but if they’re out-pacing you, let them go.  It’s just as OK to arrive a little later and not pass out.  And if you don’t let them go, you may keep up with them for a while, but you’ll pay for it in the end.  When I first started riding with Team Superior, I ran into this issue.  On days with nice weather, I found I could keep up to their middle and even high-end riders.  But once the weather hit the hundreds and the sun blazed down, there was just no way to come close to those experienced riders who were acclimated to this weather, and I found myself flagging at the tail end of the pack.  And when I say experienced, I mean that some of those riders have been riding longer than I’ve been alive.  So enjoy riding with a group, but don’t let the group dictate your performance.